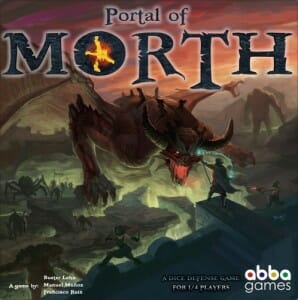 Portal of Morth is a competitive board game inspired in tower defense video games. During the game, the players will have a team of heroes with which they will fight against an ever increasing amount of powerful enemies. As a general rule, the game will have a duration of five rounds, with one wave per player each round. Each wave is divided in four phases:

1. Lord Morth’s phase: The starting player rolls the enemy dice into the portal board, to determine in what path will the enemies enter the boards. For this, the player will roll as many enemy dice as indicated on the turn track, and a 12 faced die to determine the exact position of the portal. Also, the players will receive cards to trump their opponent’s strategies.
2. Portal phase: During this phase, the players may pay gold to turn the portal, modifying the initial enemy distribution. In turn’s order, each player may pay as much gold as they want to move the portal in any direction. Once all the players have moved the portal, or have passed their turn, they will take the enemy dice that ended the phase in their zones of the portal board, locating them in the corresponding paths.
3. Heroes’ phase: It’s the heroes’ turn. During this phase, the players will move and attack with their team of characters, trying to eliminate all threats from their boards.
4. Assault phase: The last phase of each wave, during which the enemies will advance trying to exit the player’s boards. The starting player will roll a 3 faced dice, and each player will have to add the resulting number to the initial movement value of each enemy. If an enemy escapes a player’s board, the player will take damage.

Once all rounds are finished, the game ends. The winner is the player who has the fewest damage points at the end of the game. 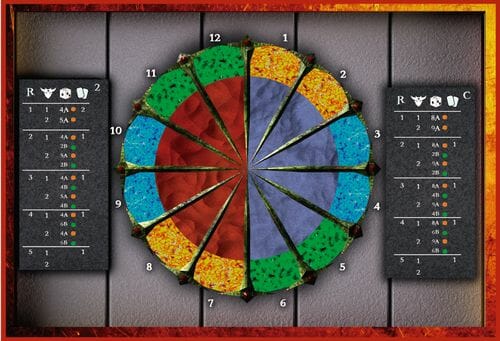